Switzerland’s domestic fuel stations hold the most promise of innovation and bringing Swiss brands into a customer-focused future.

Are fuel stations dying? It’s a strange question to ask of a market that is expected to reach $2.7 trillion in revenue globally by 2022. But with the rise of alternative fuel sources, ride sharing, electric vehicles and the impact of changing consumer behaviors and evolving regulations, the question is not so outlandish.

To explore what the fuel station will look like in 2025—and whether it will one day go the way of drive-in movie theaters and public telephone booths—we talked with Publicis Sapient energy and commodity experts in several geographies.

Christopher Hawkes, director, offered a view of the market in Switzerland. While a large variety of brands still exist, the number of fuel stations in the country – and many other European countries – has been slowly declining since 2010 and consolidation is expected in the next decade. Hawkes’ perspective? Many Swiss fuel stations are sitting on a treasure trove of customer data that they aren’t using, and those that start to act on that data will be the ones who thrive in the digital age.

Interview has been edited for style and clarity.

Switzerland is a relatively small market. What makes it unique and worth taking a closer look at?

Switzerland has the densest network of fuel stations per inhabitant in Europe. There are more than 3,300 fuel stations in Switzerland and when you look at the top five fuel station networks, three of the five – Agrola, Migrol, and Oel Pool – are Swiss and the two international players are BP and Avia. Some 90 percent of the coverage is provided by 10 brands and the other 10 percent, or 355 stations, are independents. The large number of local players is particularly strange given the small size and population of Switzerland (about 8.5 million).

A lot of the top players are associated with supermarkets. Migros is one Swiss supermarket chain associated with fuel stations, while Agrola is linked with several such chains in the country. The bigger fuel station chains all seem to have some service associated with it. It's not just a petrol station. And the question is, if you have such a small market share, are you going to be motivated to innovate, particularly as an international player? The local players will feel more incentivized to do so and they should look at things like fingerprint authentication, facial recognition and license plate recognition for service personalization and elements like digital payment.

Switzerland is in the center of Western Europe and surrounded by five countries. I imagine Swiss fuel stations have to consider customer expectations from several markets, right?

Yes, Switzerland also has a lot of transient holiday traffic. People from Belgium, France, Germany, and the Netherlands, for example, are driving through Switzerland to get to Italy, which means that there's a lot of opportunity within a relatively narrow span of space on the autobahns for the fuel stations to expand their offerings beyond being just a place for travelers to fill up their vehicles.

There’s also price sensitivity in Switzerland since things are quite expensive compared to its neighboring countries. Fuel stations can't compete on price point for those transient customers, but they can provide them with other services that encourage them to stay longer and spend more.

To that end, what kind of customer experience will people be expecting as gas gradually becomes less prominent and electric vehicles become more common?

Vehicles that run on fossil fuels can be filled up in a couple of minutes or less, but much of the world is slowly moving away from these petrol cars in favor of electric vehicles and biofuels.

For the next 10 to 15 years, it’s going to take longer to charge electric vehicles than to fill up fossil-fueled vehicles and fuel stations will have to offer other services to cater to people during that lag time, whether it’s entertainment or shopping or something else that captivates people.

Fuel stations with stores and other services are selling significantly higher volumes versus the low-volume unmanned stations, which are so ubiquitous in rural areas. At the newer fuel stations in Switzerland, many have TV screens located next to the pump, but they’re playing the same general ads for every customer. Nothing is customized yet. But if a fuel station knows I always buy ice cream, then why not display some ice cream ads on the screen? They’re missing an opportunity because they’re not using the data that they have about me to do customized advertising. This is especially true of those stations that partner with retailers who already have access to data around my purchasing habits.

Will fuel stations be able to deliver these kinds of customer experiences on their own, or will they need to build partnerships?

Partnerships will be really beneficial. For example, in Switzerland, if I'm not at home for a package delivery I have to arrange for the delivery company to come back at a time when I am at home or I have to get it sent to my office. Why can’t fueling stations offer package delivery as a service? When I fill up my car, I can also pick up my package, and as a result of picking up my package maybe I think, ‘I should buy some other things here.’

You're not directly selling an offering to the customer, but you're providing them with a convenient service that encourages them to come to a specific fueling station. For example, if Amazon or another provider needs to rapidly deliver the package, the fuel station can act as a local warehouse. This kind of service isn’t impossible, it just requires cooperation with partners. Because the majority of fueling stations make their margins from retail rather than fuel service, getting the customer into the shop means more potential profit.

"If Amazon or another provider needs to rapidly deliver the package, the fuel station can act as a local warehouse. This kind of service isn’t impossible, it just requires cooperation with partners."

So what are some of the digital opportunities Swiss fuel stations need to address?

Based on the data fuel stations have, there’s an opportunity to interact with customers and better refine their offering. Currently, they’re not taking that opportunity.

Amazon announced at CES (the world’s largest consumer technology event, Consumer Electronics Show) that Amazon Alexa users will be able to pay for gas at more than 11,500 fuel stations across the United States later this year. There are some privacy issues around that, but fuel stations need to look at those sorts of innovations to remain competitive. And they have to choose multiple technology solutions that appeal to everyone.

What’s the biggest thing that needs to happen inside a vehicle to help fuel stations become more customer-centric?

There needs to be integration with the AI that’s in the vehicle so that it understands user preferences. Fuel stations will also need to get consensus from users to share certain data so that they can become more data-driven. They could figure out why users are not always stopping at their fueling stations. The first fueling stations that figure out how to use data to provide better services that are more valuable to customers are going to be the ones that will be successful.

What about challenges for electric vehicles, for which sales have grown 40 percent in Switzerland during the last few years?

Swiss authorities believe the main challenge to getting more people to buy electric vehicles is the lack of charging stations. Initially, the number of fast charge points is going to be relatively limited and the challenge will be that you’ll have to wait to use some of the most congested fast charge points. Providers that tell you where the best charge points are for your vehicle will quickly get traction.

“...the Swiss Federal Energy Office has a strategy in place to increase the absolute percentage of new electric vehicles to 15 percent of all new vehicle sales by 2022.”

It sounds like Switzerland, like many other countries, has a lot of work to do to become more electric vehicle-friendly.

The government has plans in place to build 160 charge points along highways, but I think that will only address part of the problem; it doesn’t address many of the smaller community challenges. If you’re a tourist passing through Switzerland, for example, they’ll expect their hotel to have a charging station which many currently don’t. Also, due to low home ownership the number of people who will be able to install a charging point in their own home is relatively low in Switzerland. And many houses in cities also don’t have garages—people park on the street.

Fast forward to 2025. You pull into a fuel station. What's the biggest difference today? What would surprise you the most?

The ease of payment is going to be significantly better than it is today. In other words, I'm not going to have to go in and pull my credit card out at the pump. Payment will be done through other methods like AI, facial recognition or fingerprints. I wouldn’t be surprised to see that Apple Pay will be irrelevant in five years given how fast other technologies are coming online.

Read the rest of the series here. 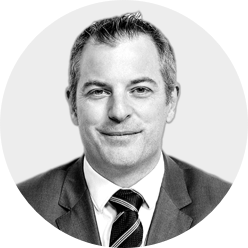