Simplicity is the bedrock of good data design

You step onto the busy subway platform as a train pulls into the station. Each subway car is already crowded and about to get much worse. That’s when your eyes intuitively drift toward a new digital display with arrival times--showing that another train will show up in just four minutes. You look around again. That’s when you decide to sit this ride out. You’re in no particular rush. And in a few minutes, you’ll have plenty more room and a pleasant commute.

Digitally transformed environments seamlessly blend physical and digital to connect visitors with their needs. Successful integration in public spaces is data-informed and agile but also needs clean and clear design that does not burden people with unhelpful information or distracting stimuli.

Cities and transit authorities interested in digital enhancements to accompany infrastructure investments should be mindful that not all innovation needs to be front-and-center.

Dan Roche, Vice President and Public Sector Lead at Publicis Sapient, says effective design of services and interfaces is at the heart of urban digital transformation. He argues travelers should be exposed to the minimal amount of data to help them make smarter decisions or feel better about the commute. But anything excessive might backfire and create more stress.

There’s a difference between data for their own sake and useful information, between the frivolous and actionable. One compounds headaches. The other comforts and aids in decision-making.

“What does the user have to be aware of? And what data help them make better choices? Beyond that it’s actually destructive. It’s no longer of any use,” Roche said.

Gimmickry might create small endorphin rushes but doesn’t have staying power. For instance, he said, it would not be helpful to have a digital subway map with every train’s location at any given point in time. This technology may be alluring at first but would get old quickly. 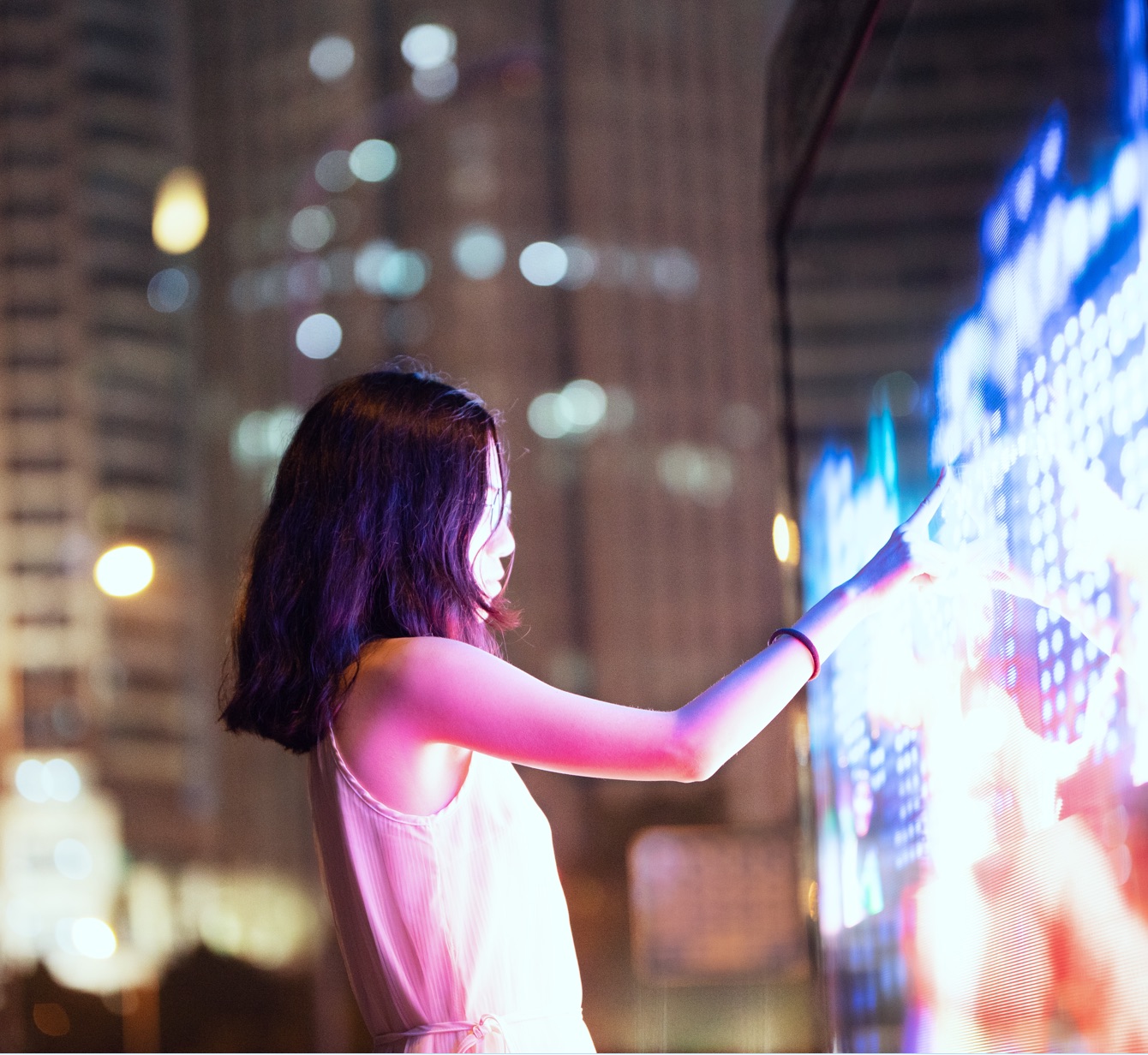 A study conducted by Google and psychologists at the University of Basel found that people rated simple websites as more beautiful than complex alternatives.

A lesson from graphic design

“If you get in the orange line, there are big and small gaps, left and right turns, up and down,” Roche said. “Is the map accurate? Is it geographically pure? No. But does it need to be? You need to get tourists in and out of the city, many of whom don’t know English very well. This gets it done.”

The London Tube map designed by technical draftsman Harry Beck in 1931 pioneered this clean and sleek technique–clearly influencing DC, as well as Madrid, Paris, and Moscow. The differently stylized New York subway map, on the other hand, is more geographically accurate and could even double as a walking map if necessary. But critics argue the added accuracy and information resulted in a cumbersome design that’s difficult for tourists to navigate.

A study conducted by Google and psychologists at the University of Basel in Zurich, Switzerland on internet-user experience in 2012 found that people dependably rated simple websites as more beautiful than complex alternatives. And these conclusions were reached within the first 50 milliseconds of seeing the design.

Much like graphic design, transit solutions should be comprehensible rather than comprehensive.

Researchers from CEA-Saclay in France and the University of Oxford in England set out to discover the maximum amount of information a person can “reasonably process to navigate in a transportation system.” In an analysis of the world’s 15 largest metro systems, they determined that maps with more than 250 connection points would push travelers against their cognitive limits.

“A transition between different search strategies for navigating in metropolitan maps has been observed for large, complex metropolitan networks,” the authors wrote. “This evidence suggests the existence of a limit associated with cognitive overload and caused by a large amount of information that needs to be processed.”

Their results, published in Science Advances in 2012, indicate that the upper limit of information humans can process while navigating is approximately 8 bits. (A bit is a unit of information in information theory.) This is similar to the famous Dunbar number for how many friends someone can have. They concluded that more than 80 percent of trips in large cities exceed the 8-bit limit and rated New York’s metropolitan system as the largest and most complex in the world.

The answers to these problems may be found in innovations for other industries. For instance, Publicis Sapient teamed up with Holland America Line, a subsidiary of British-American cruise operator Carnival, to create an interactive space that helps travelers customize their adventures. The centerpiece of this experience is Explorations Central (EXC), a touch-screen map that provides important information for planning fulfilling excursions.

“Now with EXC we actually have the tools to connect with our guests and exactly what their individual needs are to make the most of their day in port,” said KK Robins, an EXC guide for Holland America Line.

The interactive nature of EXC allows each passenger to see the overall picture or dive into particulars of each port they’re visiting. The flexibility enabled by this kind of technology allows users to easily determine how much information they process. Similar digital solutions could help transform metro systems.

Learning from the best

It’s difficult to praise subway systems because pleasant experiences rarely make good stories. Despite the Herculean task of transporting millions of people every day, we mostly complain whenever things go wrong but seldom express gratitude when things go right–even on the best subways.

Although it’s difficult to definitively rank the world’s greatest subway systems, some routinely appear toward the tops of these lists, such as Tokyo, Singapore, Hong Kong, Seoul, London, and Paris.

In order to create beneficial digital experiences, transit authorities should consult data on the travel patterns of their customers and the technological shortcomings of their current systems to meet these demands.

Improving the customer experience and collecting data for further developments can be done simultaneously. For instance, the Minneapolis Institute of Art’s Journeys App, developed with Publicis Sapient, allows users to curate their own tours based on which artworks they most want to see and learn as they go. All the while, the data collected tells staff how visitors are using the museum so they can adjust their communications and programs to give visitors exactly what they need. Similar apps for metro travelers could provide comparable benefits.

Another way subway systems are improving rail travel is by streamlining the purchase process.

Unlike most mass transit systems, which operate at a deficit that requires government subsidies, Hong Kong’s Mass Transit Railway (MTR) Corporation is completely self-sustaining in part thanks to its “rail plus property” model. The corporation, which reported a net profit of more than HK$16 billion in 2018, makes money from its real estate investments as well as transit operations. MTR’s financial stability enables bold moves and advancements in the services it provides.

In the mid ‘90s, MTR pioneered advanced contactless smart cards with the Octopus card, which has a built-in microchip that can now be used on all public transport in the region. This advancement inspired similar systems around the world including London’s Oyster smartcard.

Since 2014, travelers on the London Underground were given an additional option with the Future Ticketing Programme, which allows travelers to use contactless credit and debit cards. This transition coincided with the overall adoption of contactless purchases throughout London.

Shashi Verma, the chief technology officer at Transport for London (TfL), the government body responsible for Greater London’s public transit, said in a statement that they are delighted with how popular the contactless option has become.

According to a 2019 report from TfL, customer satisfaction on the London Underground has been consistently high–fluctuating around 85 percent–since 2014. Annual surveys have shown an overall rider satisfaction increase this century.

“We are also now working with other world cities to share our experience and knowledge to help them introduce a similar ticketing system in the coming years,” Verma said.

But digitizing private transport in London recently hit a roadblock. On Nov. 25, TfL announced it would not renew ridesharing company Uber’s license, citing a “pattern of failures” that placed passenger safety and security at risk, such as letting passengers get into cars with drivers who are “potentially unlicensed and uninsured.” According to TfL, a change to Uber’s system had allowed unauthorized drivers to upload their photos to other drivers’ accounts.

Although New York never adopted smart cards and still uses the MetroCard, a magnetic stripe card introduced in the early ‘90s, the city is in the midst of rolling out the same contactless technology that’s already available in London. With this new system, OMNY, New Yorkers can use contactless bank cards or smartphone digital wallets to travel at select stations in Manhattan and buses on Staten Island.

“Our customers have adopted OMNY at impressive levels during the public pilot and I expect that to continue now that we're beginning to roll out to the rest of the system," Al Putre, the OMNY program executive, said in a statement on Nov. 12.

“We are working relentlessly to deliver this new fare payment system effectively through meticulous and continuous testing and monitoring,” he continued. “We are excited to start this next phase to bring all MTA customers the ease and convenience of tapping at the turnstile.”

Time will tell if these changes improve the overall subway experience for New Yorkers. Earlier this year, City Council Speaker Corey Johnson’s office released a survey of roughly 10,000 subway riders. Sixty-two percent of participants said they were either “not satisfied” or “highly unsatisfied” with the service. The most common complaints were delays, overcrowded trains, and frequent route changes.

The key to digitally transforming subway systems throughout the world is making the traveler's experience easier. That’s it. New technology can help transit systems achieve this goal, as long as it’s not superfluous or more trouble than it’s worth.

Data can help guide these developments to offer a user-focused, digitally enhanced transit experience. But taking a cue from design strategy, we don’t need to burden travelers with these data–just their benefits.